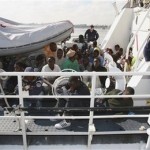 Immigration: Manganelli wants to expand cooperation to Turkey and Greece

According to the Chief of Police Antonio Manganelli, it is possible to block the landing of illegal immigrants at the coast of Salento ‘through the expansion of international cooperation to Turkey and Greece,’ Manganelli said to a journalist on the way to Lecce, where a mass was to be held in honor of St. Michael the Archangel, patron of the State Police. ‘We have worked well with a number of countries in West Africa and with Libya. We have reset landings on Lampedusa. But we have a problem,’ Manganelli admitted, ‘We are still open for those, crossing the routes through Turkey. I was in Greece last month to talk about this problem with them. Rodolfo Ronconi, Central Director of Immigration and Border Police at the Italian Ministry of Interior is going to visit Turkey in the next view days. After Lecce,’ Manganelli said, ‘I will leave for Brussels to meet the heads of the European and African police forces to discuss precisely this issue.’

One response to “Italy – Greece – Turkey”