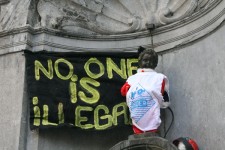 From 25 September to 3 October, a noborder camp is taking place in and around Brussels, with demonstrations, public lectures and actions for freedom of movement of people and against repressive migration control. By now a regular feature of the European political landscape, noborder camps are organised to intervene in the migration control regime inland (detention centres) and across borders (border control) and link different struggles and share information in autonomous spaces.

The Brussels noborder camp has been met with high levels of police action. (more on statewatch.org)