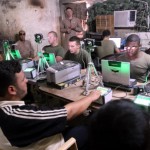 A special European Crisis Reaction Mechanism should be set up to help cope with any chemical, biological, radiological or nuclear disaster caused by an accident or terrorist attack, believes the EP Civil Liberties Committee. This would enable the EU to deploy civilian and military resources more swiftly. A European Civil Protection Force – a longstanding demand of Parliament – is also needed, says the committee in a draft resolution adopted on Thursday.

Chemical, biological, radiological or nuclear (CBRN) disasters, whatever their cause, pose serious threats to the safety and the security of EU citizens and grave risks to the environment and critical infrastructures of Member States.

Disasters do not respect national frontiers

The Civil Liberties Committee argues that the EU should strengthen its approach to prevention, detection and preparedness as well as response by creating special mechanisms, thus making cooperation and assistance among EU Member States „compulsory“.

“The implications of carelessness and laxity know no borders”, warns Ana Gomes, „since CBRN disasters or attacks, while occurring in one Member State, might affect lives, health and the environment in another or several European countries, as the toxic mud disaster in Hungary has recently shown“.

„The review of the current EU CBRN Action Plan in line with the recommendations approved today is paramount to ensure the safety and security of all EU citizens against the grave risks that stem from a possible incident or terrorist attack with CBRN substances within the Union“, said Ana Gomes after the vote.

A European Crisis Reaction Mechanism would coordinate civilian and military resources. There should also be an EU Civil Protection Force based on the existing EU Civil Protection Mechanism, say MEPs, to „enable the Union to bring together the resources necessary for providing emergency assistance, including humanitarian aid, within 24 hours of a CBRN disaster inside or outside EU territory“.

The draft resolution calls for the creation of regional/EU-wide stockpiles of response resources and EU/regional specialised response teams, including medical personnel, law-enforcement staff and military personnel. The CBRN Action Plan should point to ways in which “Member States would share counter-measures and resources in the event of a CBRN accident or terrorist attack, so as to put the new Solidarity Clause [enshrined in the Lisbon Treaty] into practice”, MEPs add.

Commission and Member States should work on a legal framework to regulate and monitor transactions of CBRN materials, thus ensuring that all suspicious transactions, as well as the loss or theft of CBRN materials, are reported. The resolution calls for a strengthening of the security measures to prevent CBRN disasters, as the Council has watered down the measures contained in the original Action Plan proposed by the Commission, say MEPs.

The committee also urges the EU institutions and Member States and the private sector to put the safety of EU citizens first, while recognising the economic costs of the replacement of high-risk by lower risk materials for the relevant industries. What is at stake, MEPs stress, are „the rights to life, liberty and security of all people in Europe and their societies“.

The chemical industry, in particular, should replace the use of high-risk chemicals with suitable lower-risk alternatives, where such replacement is „scientifically, technologically and environmentally possible“ and where „there is a clear increase of security“. In this connection, MEPs ask the Commission to deliver a study on the implementation of the REACH regulation.

The draft resolution, authored by Ana Gomes (S&D, PT) and adopted by 47 votes to 0 with 3 abstentions, is the Civil Liberties Committee’s response to the new EU CBRN Action Plan presented by the Commission in June 2009 and adopted by the Council in November 2009. The current EU Action Plan entered its implementation phase in all Member States in July 2010. The full Parliament will vote on the draft resolution at its December plenary session in Strasbourg.