Browse: Home / 2011 / August / Libyan Rebels Are Flying Their Own Minidrone

Libyan Rebels Are Flying Their Own Minidrone 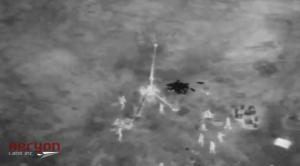 The Libyan revolutionaries are more of a band of enthusiastic amateurs than experienced soldiers. But it turns out the rebels have the kind of weaponry usually possessed by advanced militaries: their very own drone.

Aeryon Labs, a Canadian defense firm, revealed on Tuesday that it had quietly provided the rebel forces with a teeny, tiny surveillance drone, called the Aeryon Scout. Small enough to fit into a backpack, the 3-pound, four-rotor robot gave Libyan forces eyes in the sky independent of the Predators, Fire Scout surveillance copters and manned spy planes that NATO flew overhead. Don’t worry, it’s not armed.

So far, the rebels have just one Scout among them, according to Marni McVicar, Aeryon’s vice president for business development. Working with a Canadian private security company called Zariba, Aeryon delivered the Scout “several weeks” ago to rebels in the Western port city of Misurata who used it, according to McVicar, to hasten their surprisingly rapid march to Tripoli. (more on wired.com)