Unmanned drones may be used in police surveillance 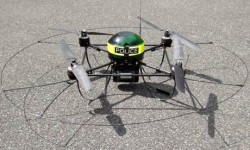 More and more police forces and government agencies are exploring the potential of unmanned drones for covert aerial surveillance, security, or emergency operations across the UK, the Guardian has learned.

The Serious Organised Crime Agency (Soca), which works closely with police forces and MI5, published an unusually detailed public tender notice in the summer requesting submissions from suppliers of airborne observation „platforms“ that can be adapted for „target acquisition“ and intelligence-gathering. (more on guardian.co.uk)

One response to “Unmanned drones may be used in police surveillance”