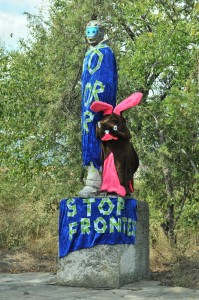 Today, the nobordercats crossdressed the monument of the borderguard and his german shepdog in Svilengrad. “This is an action aignst Frontex”, explaned nobordercat Matze. Frontex is the EU border agency, which was established to tackle the so called “illegal migration”. The Frontex officers already arrived in Bulgaria. They train the bulgarian border police to build up fortress europe. Frontex is also operating with RABITS – Rapid Border Intervention Teams for example at the turkish/greek border. They are hunting refugees.

Freedom of movement! NO BORDER!