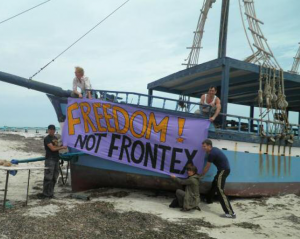 A migrant was killed as Frontex patrol opened fire to migrants crossing the greek-turkish border at Evros river, according to Turkish Press.

The newspaper says that the day before yesterday (prob. 24/8) a group of migrants were attempting to cross illegally from Evros in Greece in Ouzounkioprou of Edirne, as Frontex forces opened fire on them.
According Hurriyet, the migrants have used 5 inflatable boats to cross the river. From the gun shots one of the boats carrying 10 people sunk, and the migrants swam to the turkish shore. However, a migrant who was waiting to board on a boat at the Turkish side was hitted on his back.
The incident, according to the newspaper, was denounced to the soldiers of the Turkish border post, and when they reached the point of the incident they fount 47 migrants from Afghanistan, Bourma and Somalia and the dead migrant as well. The type of the bullet is used in MP 5 weapons.
Turkish source: http://www.sondakika.com/haber-frontex-timleri-turk-sinirina-ates-acti-2954543/