Browse: Home / 2012 / Januar / US: First rulings in our lawsuit over DHS travel records

US: First rulings in our lawsuit over DHS travel records 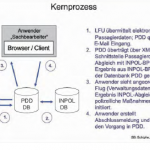 U.S. District Court Judge Richard Seeborg has issued his first rulings in Hasbrouck v. CBP, our lawsuit seeking information from and about DHS records of the travels of individual US citizens.

Judge Seeborg granted some of the government’s motions for summary judgment and some of ours, ordered US Customs and Border Protection (CBP) to conduct further searches and disclose any non-exempt responsive records they find, and ordered the parties to confer on the remaining unresolved issues.

We’re still studying the order, which we received notice of late yesterday. But here are some key aspects of the ruling — including some issues of first impression for any Federal court — and some issues it raises: (more on papersplease.org)