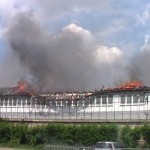 On 13 January 2012 in the Paris appeal court, the presiding judge in the appeal involving six of the ten detainees in the Vincennes detention centre (CRA, centre de rétention administrative) who were convicted on 17 March 2010 in connection with a fire that burned down the CRA on 22 June 2008 read the ruling that upheld their convictions and shortened the sentences they were set to serve by six months.

The ruling noted that the Vincennes detention centre was „artificially divided“ into two and that the large numbers held there „facilitated the disturbances“, and that external factors such as the fact that fire extinguishers were not charged, the mattresses were not fire-proof and that the facility was supported by a light structure helped the fire to grow. Thus, MD received the longest sentence, 30 months, four others were handed two-year prison sentences, and the sixth was sentenced to serve six months. Two defendants were also ordered to pay 9,864.22 euros to compensate the injuries suffered by police officers, and 50 euros to five civil plaintiffs.

Throughout both trials, defence lawyers stressed that it had been a collective mobilisation caused by an „abusive“ detention system, and that charging just a few people out of 250 was questionable, particularly as the evidence was „slight if not non-existent“. Key elements of the first trial included a failure to relate the protest and fire to the regime that detainees were subjected to in Vincennes and to the controversial death of a Tunisian detainee, Mr. Salem Souli, on 21 June 2008, the day before the fire. On 5 July 2010, the Commission nationale de déontologie de la sécurité (CNDS, national commission for the professional ethics of security forces) was critical of the decision to keep the man in detention in spite of his poor health conditions. Defence lawyers repeatedly walked out of proceedings in the first trial, arguing that it was a „foregone conclusion“ and had been „demeaned“, in view of the way in which it had been framed, isolating the fire from the death of Mr. Souli, conditions in the centre, previous repressions of protests, the use of inconclusive video evidence and over-reliance on statements by guards and police officers. Almost all the participants in a demonstration on the following day outside Vincennes detention centre were kettled and held in a police station.

The following is a translation of the account of the appeal’s last hearing from Migreurop (source for the above report), which has monitored both the trial and appeal in the framework of its campaign for a right of access in detention centres. It also focusses on the mass arrest of activists during a demonstration outside the Vincennes detention centre on the day after the appeal trial’s verdict.

The courtroom in the court of appeal is full. Many activists have come to hear the verdict out of solidarity with the Vincennes „accused“. The lawyers for the defence, the public treasury and the plaintiffs are in the front benches. None of the „accused“ are present.

The president begins by announcing that the court has taken several criteria into account, beyond their individual situations. On the one hand, the court recognises that the Vincennes CRA was „artificially divided“ into two centres in 2008 and that the „concentration of a large number of detainees in the same place „facilitated the disturbances“. On the other hand, it admits that the fire acquired an important size due to external factors: the fact that the fire extinguishers were not charged, that the mattresses were not fire-proof and that the facility rested on a light structure.

In spite of these findings, the court confirms the personal guilt of the six who were convicted, thus rejecting the defence’s arguments concerning the collective character of the protest. According to the president, the people who were charged did not play a minor or non-existent role, but rather, they actively participated in starting the fire. The court deems that certain detainees and not all of them set the fire, which is what the surveillance camera recordings supposedly bear witness to. The president reaffirmed that the people were not chosen by chance: in his view, the cameras show that A.D. is a leader, that M.D. tries to obstruct a camera and that Ma.D. carries something that is burning. In the other CRA, M.S. and N.A. are supposedly the only active detainees. The president admits that other detainees have „undoubtedly“ participated, but concludes, regarding the six convicted people: „They have not played a minor role, they are not scapegoats“.

The six men’s guilt is confirmed. The sentences issued against them have decreased by six months in comparison with those from the first trial:

The president starts reading another ruling, the courtroom empties and the supporters are bitter. While the court recognised the importance of several external factors in the fire and slightly reduced the sentences for the accused, it confirmed their personal responsibility in the fire and in the CRA’s destruction. In view of the elements that the defence stressed throughout the trial, it nonetheless appeared that this fire was the result of a collective movement caused by an abusive detention system, that the trial of a few men out of around 250 detainees rests on a questionable choice and that the evidence against them is rather slight, if not non-existent. One may also wonder whether this verdict that is simultaneously based on a consensus and strict, which mitigates the decisions from the first trial without contradicting them, is mainly aimed at defusing the matter. Finally, it should be noted that the name of Mr. Souli, who died in the Vincennes detention centre on the eve of the fire, was not mentioned once during this last hearing.

Saturday 14 January: a gathering turns into a mass arrest

On the day after the verdict, Saturday 14 January 2012, around 130 people gathered in front of the Vincennes centre for administrative detention to protest against the existence of these detention centres and other places of detention. One of the goals of those who gathered there was to make themselves heard by the sans-papiers who were held inside the centre, which was achieved (partly thanks to some bangers). An hour and a half after the start of the demonstration, the march was blocked by flying squad police officers in a parking lot near to the CRA. While the gathering was taking place calmly, the demonstrators were teargassed, shoved and encircled. For over an hour, they were forced to stay inside the circle [kettled] while some plainclothes police officers violently broke into the crowd to catch several activists who they had targeted.

Finally, the 102 people who were kettled, that is, almost the whole of the initial march, were arrested. Three demonstrators were held in custody. The remaining 99 were confined on two buses (some of them for nearly three hours) and were then transferred to a police station adjacent to a SNCF [French national railways] depot. This new facility in the 18th district, which is officially a regional transport police station, has a large courtyard ringed by barbed wire that is suitable for mass arrests. After undergoing a search and identification, the demonstrators were held in the courtyard for several hours. The three people who were held in custody had an „immediate appearance“ before the judge on Monday 16 January, but the hearing was deferred. The reasons that were raised [for them being held in custody] were: participation in an armed gathering, violence against an officer and damaging private property.