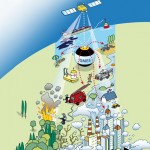 As Europe’s Global Monitoring for Environment and Security programme nears its full operational phase, its benefits and economic potential for Eastern Europe came into focus last week at a conference in Bucharest, Romania.

In the summer of 2010, heavy rainfall unleashed floods in northern and eastern Romania. Over 20 people lost their lives, while hundreds of homes were destroyed. Thousands of hectares of farmland, forest and pastures were damaged.

GMES has been active in Eastern Europe for years, identifying sources of pollution in the Black Sea, providing emergency mapping services for mudslides in Bulgaria and monitoring biodiversity of protected areas in Romania.

These were just some of the examples presented at the ‘GMES: New Opportunities for Eastern Europe’ conference last week. The two-day event was held in Bucharest, Romania – ESA’s newest member state.

The conference aimed to increase awareness amongst Eastern European countries – and in particular the 12 new EU Member States – about GMES and its potential benefits for the environment, civil security and commerce.

Once GMES moves from its research and development phase to full operations in 2014, decision-makers will have access to reliable, timely and accurate information services to manage the environment, understand and mitigate the effects of climate change and ensure civil security.

The programme plans to extend and improve its services with the upcoming series of Sentinel satellites, which are being developed specifically for the operational needs of GMES. Together with in-situ data, the Sentinels will ensure the provision of an uninterrupted data and information flow to the users.

Opening the conference, the president of Romania’s National Authority for Scientific Research, Dragos Ciuparu, spoke about the ever-increasing relevance of Earth observation data not only in Romania, but also in the 12 new EU states.

Mr Ciuparu stressed the need to get the new EU Member States better acquainted with GMES and the role it can play in benefiting the creation and growth of small and medium businesses.

The economic benefits of the GMES programme also came into focus at the conference, as it will generate an estimated €4–12 for every €1 invested.

GMES will not only serve as a trigger for the creation of new markets, jobs, income and economic growth, it will also lead to a substantial amount of savings at both national and local levels.

GMES services will help to save costs through the improved management of natural resources and efficiency in the mitigation of emergency situations.