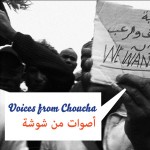 Around 3000 migrants and refugees who fled the war in Libya in 2011 are still living under inhuman conditions in the refugee camp at Choucha (Tunisia) near the Libyan border. Most come from Sub-Saharan Africa but there are also nationals of Bangladesh, Pakistan, Palestine and Iraq.

Some in the camp have been accepted as refugees and are awaiting resettlement. Others are waiting for UNHCR’s decision on their case to be accepted. Hundreds are denied any status at all because their cases were not processed properly and they have not had access to lawyers or to good interpreters.

For a large number of newcomers, among them many boat people pushed back to sea, no processing will be started. Those not accepted as refugees are threatened by UNHCR and the military with being sent back to Libya or to their countries of origin, without considering their different kinds of problems there. If they do not go, they can be arrested at any time and put in prison.

Everyone in the camp, among them small children, must endure harsh living conditions in a desert region where daytime temperatures can reach over 40 °C and sandstorms are frequent. For example:

Insufficient drinking water (only one bottle per day)
No showers and only broken toilets without any privacy, especially for women
There are snakes, scorpions, mosquitoes and rats in the camp and people have no protection against them
Food is of very poor quality, without meat or vegetables, and quantities are insufficient
People do not receive money and clothing
Medical treatment is very poor, with no provision for people who have been traumatized by torture and war in Libya or in their countries of origin

The camp is under military control and does not admit visitors without official permission from the Ministry of Defence. Migrants cannot even move around inside Tunisia without risk of being arrested. Most camp residents, among them small children, have been in Choucha camp for more than 18 months. Some have tried to go back to Libya but were arrested and tortured there. Others have become so desperate that they have tried to reach Europe by boat but been pushed back or died at sea.

In recent months, the camp residents have started to organise protests in the name of the »Voice of Choucha«. Migrants’ demands are:

A review of cases for those whose applications for refugee status have been rejected
Faster processing and resettlement for more people
Humane treatment and living conditions, which is not possible in a camp like Choucha
Freedom of movement inside and outside Tunisia
Equal rights for everyone without discrimination

Those who took part in the protests have been threatened by UNHCR and the military, and they are frightened because some migrants were beaten and killed by soldiers in May 2011. Boats4People and the workshop “Migrants’ rights” at the Forum in Monastir support their struggle and demand that EU governments open their borders to the migrants and refugees from Choucha and elsewhere. They must immediately find a human solution for all in cooperation with the UNHCR and the Tunisian government!

This is a very urgent case and we are calling for urgent action!
http://voiceofchoucha.wordpress.com
http://boats4people.org