In Italy, an ambiguous justice 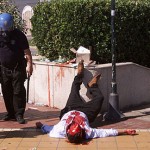 Everyone recalls the violence, abuses of power and torture by numerous police officers against demonstrators during the Genoa G8, as well as the violence by the self-styled “black bloc”. Eleven years after the 20th and 21st of July 2001, the third instance of Italian justice [the Corte di Cassazione, Italy’s highest appeal court] has just issued its definitive sentence against the officers accused of beating the 93 demonstrators who were sleeping in the Diaz school and then, straight afterwards, a second verdict against ten demonstrators who were charged for “destruction and looting” and accused of being responsible for the “devastation” of the city and for seriously endagering public order.

Following the scheme that was adopted from the start, the judicial treatment of the Genoa G8 thus sought to portray a balanced image, convicting both police officers and demonstrators at the same time.

But the truth is that these two sentences (as well as the others) are extremely unbalanced. This is why:

1) The highest officials in charge of public order in Genoa have been left untouched. Giovanni De Gennaro, head of the police at the time, has continued to advance in a career that is more than brilliant, until he became the head of all the country’s secret services, and is currently the Monti government’s under-secretary in charge of these services. Still in a position of great power thanks to the support of heavyweight figures on the left and right alike, he was even able to change the rules for career advancement in the police in order to favour his people and place those who disagreed with his methods in quarantine.

2) Almost all of the police officers, and particularly those from the carabinieri, who were responsible for disorder in the streets and even for considerable destruction or devastation (facts that were widely documented in hundreds of images, videos and even by testimonies in court) were not even charged. In particular, there was flagrant evidence of how the carabinieri had provoked disorders and destruction through an absolutely unlawful attack against the authorised and peaceful march of the so-called “tute bianche” (anti-globalisation activist group, lit. “white overalls”) as well as other demonstrators, including children, elderly people, nuns and priests (1).

3) The police officers who were convicted – with relatively short sentences – for violence at the Diaz school will not even spend a day in prison and will probably find a way not to pay the costs of the trial nor damages to the victims. Nor will they be made to pay back the wages of the extremely high-level posts to which they have been promoted over these last eleven years, just like there will not be any punishment for the police authorities and governments that have protected and even aided them in some surprising career advances while they were being prosecuted for serious crimes (although the Italian penal code does not yet provide for the crime of torture and, hence, it is treated as simple “blows and injuries”, which entails the statute of limitations intervening for the very light sentences that are envisaged for this kind of offence). In fact, the only punishment that strikes them is the prohibition from exercising any public function for five years, which has led to them resigning from their functions – for some of them, the direction of departments of the secret services and of special units of the state police.

4) Instead, the ten demonstrators, the only ones charged for all the “devastation and looting” that occurred (some of them even confessed, but they were not part of the black bloc) were sentenced very heavily (to between six and ten, and even fourteen years). Such sentences are seldom issued to people who are guilty of murder or other very serious crimes, while the demonstrators were only accused of breaking shop windows, attacking cash dispensers (unsuccessfully) and committing other acts of so-called vandalism, but without ever placing anyone in danger, nor attacking any police officers.

Hence, it is obvious that the aim of this judicial strategy has been to reach exemplary sentences, probably wished for by almost the totality of the state authorities and parliament (from both the left and right), led by those who are notoriously quite close to the police forces. It seemed evident that there is a will to confirm the logic of “zero tolerance” that has been dominant for over 20 years, all the more so as the authorities fear an escalation of revolts due to the impoverishment that the current management of the financial crisis is causing.

What happened at the Genoa G8 was not a trivial sequence of mistakes and clumsy acts by police officers and a case of planned violence by the black bloc or “anti-globalisation” protestors. It was an attempt (previously held in check through years of complaints by demonstrators who were its victims) to test the militarised management of public order. That is, it was a precise plan whose aim was, by resorting to the most brutal violence and to set-ups, to smash a protest that was becoming too popular and worldwide, and which the great powers of the world were no longer willing to tolerate. This is why more or less 300 people from the “black bloc” were allowed to break things, while the police disposed of the force and means to stop them straight away. But in this way, the authorities were able to use the acts of destruction (which, in any case, were rather symbolic) caused in this way to legitimate their own violence. It is worth noting that none of the [convicted] demonstrators had a firearm or blade, that nobody tried to attack or disarm the police officers, whereas the latter did not hesitate to wade in and strike people without concern in a crowd or to launch their armoured vehicles at high speed in its direction. This is why all the police chiefs (except for the few who showed their disagreement) were rewarded with promotions that are hard to imagine in any other country, even those whose façade is democratic. But in Italy, it is even possible to disregard appearances (from fascism up until Berlusconi). Thus, arrogance, cheek, and most of all the possibility of doing and undoing things in accordance with what the stronger actor wants prevail. It is enough for some chiefs of the police forces, of military forces and from other institutions to amass good relationships of friendship/protection, even through the use of secret dossiers, with several high-level personalities, including those from the Vatican and the finance sector. In fact, after the fascist period, this country has never ceased to experience coup attempts, conspiracies and murders that were also fostered by sections of the secret services and of the national and transnational powers, including mafia syndicates.

It is not in the field of the fight against the mafias, terrorism, corruption and the underground economy (which reaches 35% of the GDP in Italy), nor for the strict defence of the res publica (lit. “public thing”), that the police officials who defended the honour of their colleagues who were responsible for enacting the most cowardly violence and even acts of torture against the anti-G8 demonstrators in Genoa learnt their job. They learnt it during decades in which they acted in an entirely different way from that prescribed since 2001 by the Council of Europe’s Committee of Ministers (the “European Code of Police Ethics”, ECPE, which has not yet been adopted in Italy, like it has not even adopted norms against torture).

Now, if this has been possible in a country with such a democratic Constitution, it is because the parliamentary majorities and governments that have succeeded each other, from the centre-left to the right, have continued to cultivate relationships of complicity with police and military hierarchies to cover up all sorts of matters that swayed between legality and illegality. It was Giuliano Amato, formerly [Italian Socialist Party leader] Bettino Craxi’s right-hand man, who chose De Gennaro as the chief of the state police when he was not the best qualified candidate; and it was Luciano Violante, a senator at the time, and Massimo D’Alema who forcefully supported this choice (today, MP Marco Minniti, their disciple, is also the head of the ICSA Foundation – for security and defence research – that brings together all sorts of representatives of the secret services, police and military in its board of directors). After Mr. De Gennaro came to power in the police, there was a proliferation of promotions of police officials to the rank of prefetto (government envoy in charge of security) and there was a progressive militarisation of all the police forces – even of firefighters and local police forces, because recruitment was reserved to those who had been volunteers for three years in military missions in Somalia, Iraq, Kosovo, Afghanistan, etc.

A final remark: it appears rather symbolic that over these last 20 years, cases of corruption, abuses, violence and other criminal offences concerning police officers have increased up to the point where their rate can be estimated at around ten times that of the male population aged between 18 and 65 years of age. Likewise, the rate of MPs charged for the most diverse offences reaches close to 30 times that of the male adult population. The Monti government has promised strictness and a serious fight against corruption and tax fraud. But are the Italian police forces (public and private, national and local) in a position to fulfil these goals? Or, rather, are they more zealous with the weak, demonstrators, Roma people, immigrants, or even victims who are caught by torturers? Who is going to deploy a real plan for a democratic clean-up and rationalisation of these police forces, like the military forces and the public administration in general, since the level of the underground economy, of corruption and of tax fraud is unparallelled in European countries? However, as has been shown by numerous works of comparative research, Italy is the country in which the cost of security – public and private – per citizen is highest.

But this has only been useful for the business of certain companies and the careers of certain personalities. The real insecurities that strike the least protected sections of the population are not countered. This is true of illegal or semi-illegal employment, accidents in the workplace, pollution, the illegal disposal of toxic waste and the damage caused by environmental mafias, whose consequence is the spread of cancer. The economic crisis appears to favour underground economies, to the point that abuses of power spread due to the growing erosion of the possibilities for political action for a majority of the population. The asymmetry of power that has been imposed during these last 20 years of neo-liberal success (also within the ranks of the left) has assured impunity for the police hierarchies as well as for most dominant actors in every sector, while the possibility for the population to defend itself has weakened. As stated by Boltanski, “one would have to admit that the institutions are groundless and that the power they exercise rests on an empty space. The cause of critique is the cause of democracy”.

(1) See the documentation and videos on the website http://www.processig8.org as well as in the documentary “OP Genova 2001”.