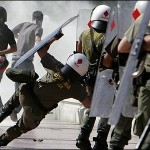 An act of terrorism serves a twofold purpose: besides the obvious catastrophic consequences of such a random act of violence, there is a more subtle, more powerful effect at work: the psychological undermining of the population’s trust and confidence in the authorities that are sworn to safeguard them. It embeds into the collective mind of the citizens, a sense of fear and dread, a feeling of powerlessness and insecurity for the future and the days that lay ahead.

As the EU’s relevant authorities on preventing and combating terrorism, the heavy burden of assuring the populace and ensuring that they continue to enjoy the same privileges of freedom, liberty and justice as they have done for so many years, falls squarely upon our shoulders. Terrorism as a phenomenon cannot be fought through spasmodic and individual actions but only through determination, cooperation and unity.

The CEPOL Unit of the Hellenic Police Academy, with all of the above in mind, undertook the responsibility of organising a CEPOL Seminar on “Counter Terrorism Awareness”. The event took place in Athens, Greece on 03- 06 July 2012.

The activity’s target group was Senior, middle-ranked Police Officers or experts from EU Member States, Associated countries and EU Agencies specifically involved in Counter Terrorism activities within their organisations. The seminar was supported by experts from Italy, Spain and Europol as well as Greek experts from various services that deal with Counter – Terrorism.

The seminar’s main objectives, which according to the participants’ feedback were fully met, were:

During the Seminar’s opening and after an introductory CEPOL – EU and e-Net awareness presentation, the first day focused on Europe’s tools for cooperation and prevention of terrorism phenomena whilst a presentation on the CoPPra Project given by non other than the project’s manager himself, he too a seminar participant. The day continued with a look into the Italian Anarchist pro-Insurrection Movement and the Italian approach to preventive measures on counter terrorism and concluded with the threat posed by Al Qaeda in the Maghreb to Europe, provided by the Spanish expert.

Day two opened with a focus on domestic terrorist groups followed by the “CTU’s strategy for the successful confrontation of domestic terrorism”. The day’s program was enriched with a presentation by the Spanish participant, an expert himself on the “Use and misuse of the Internet by terrorism”. A presentation was delivered on “Religiously motivated terrorism”, supported by an extensive workshop, wherein the participants were given a hypothetical bomb threat scenario that required them to gather intelligence, assess the level of threat and find the proper channels for communication with CT Units in other Member States, in order to gather the necessary information.

The third day’s presentations started with a spotlight on an important domestic Greek terrorist group, their emergence and activity, their transformation from an anarchist group to a terrorist organisation with international range and the two years of sequential arrests of their members that led to the dismantling of their operations. The next presentation offered a view on the forensic applications of evidence found on terrorist attack sites with: “A secret hidden in tinny evidence”. The workings concluded with the workshop “Table Top exercise Achilles’ Heel”, which was a practical audio visual exercise based on a specific scenario and structured hypothetical real-time questions.

The last day’s workings commenced with a presentation – “Introduction to the basic IED circuit; pressure cookers cases – Ways of diffusion, based on field experiments”, which was enriched by the actual videos of the field trials. The final presentation of this activity was dedicated to “Dying to kill: a general view on suicide terrorism”. Following that, the outcomes of the seminar were reported while recommendations and conclusions were drafted. Closing the seminar, the Director of the Hellenic Police Academy, Police Brigadier General BALIS Dimitrios, delivered the certificates to the participants.

The use of CEPOL’s e-Net fully supported the activity throughout the duration of the seminar and was greatly appreciated by both lecturers and participants.

A participant from the Netherlands wrote the following in his evaluation:
The Awareness Seminar was very well organized. It was a very good combination of learning and networking. The program was well selected. The e-Net was new to me and in the future I will use this system for information and communication with my colleagues. The lessons we learned from the Greek colleagues were very interesting. I learned a lot about left wing terrorism and its organizations. In our country we have experience with extremism but not with left wing terrorism. In the table top exercise, we had the possibility to discuss with different countries and their approaches. All the learned lessons were used in the table top exercise. For my work in the Netherlands, I can use the knowledge in presentations for my colleagues and my work as a detective specialist. My compliments to the Greek colleagues for a very good week.